For the past few months all of my creative work has been drawing. I haven’t been writing because when I sit down to be creative, pictures come out instead of words.

I’ve had some affinity in the direction of cartooning in particular since even before I began to draw. I actually wrote about this in my first “Learning to Draw” post back in March of 2021!

An ex-girlfriend and I produced Roger and Rufus (below), the story of the friendship between a pet dog and a goldfish. I wrote; she drew. Alas, it was short-lived. The founding team split, citing creative differences and overwhelming misery in each other’s company.

A few years later, I wrote another comic strip as a marketing experiment for Man-UP! Life Coaching. It was a superhero parody called MAN UP Man. I collaborated with a contract illustrator we found on the interweb. We kept the project running for several months, but it didn’t find traction. Eventually, the business outgrew the comic, so we spiked it. 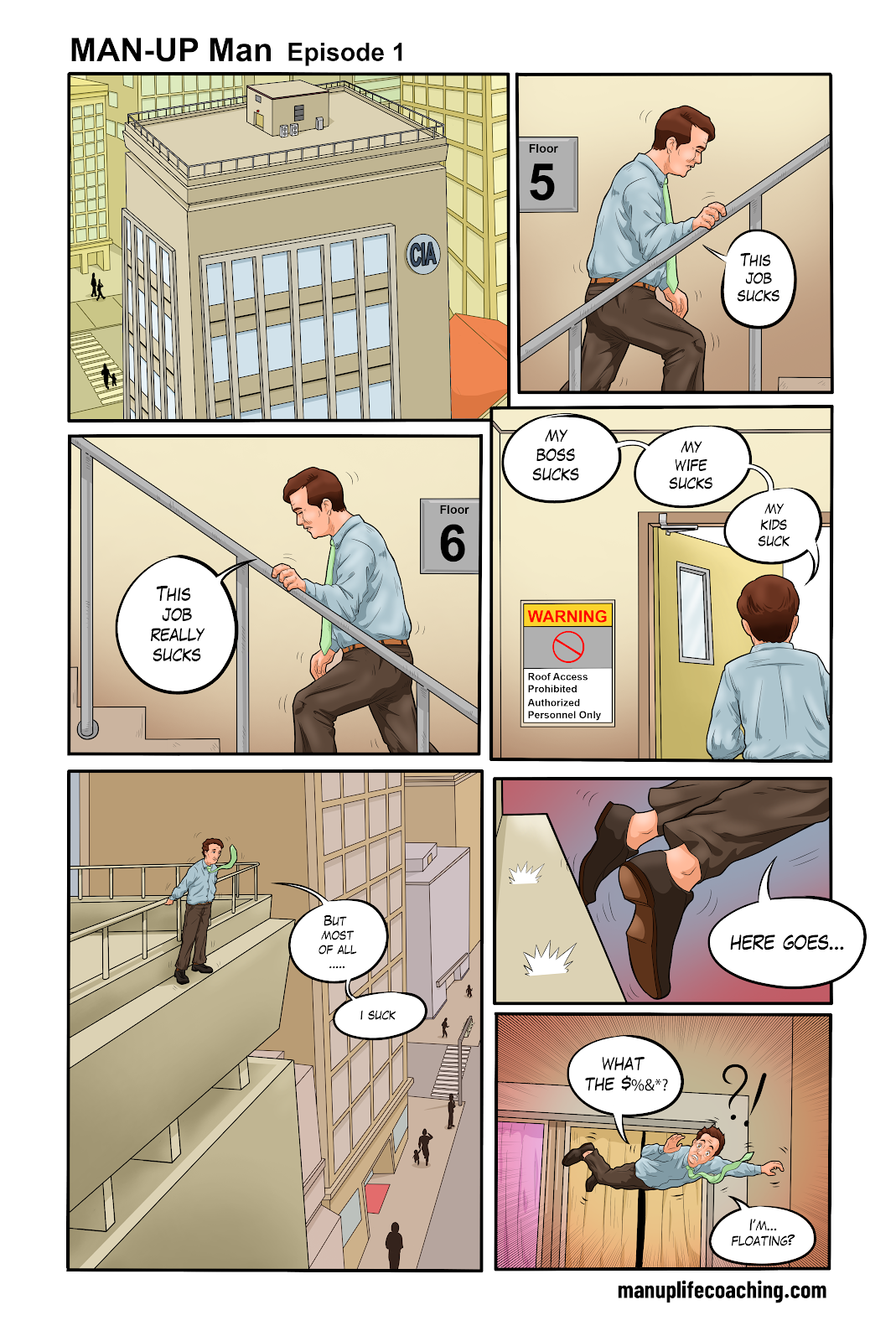 I started playing around with cartooning almost as soon as I began drawing. As I understand–I am no expert–this is a natural progression in the maturation of an artist. Even non-artists can understand that the prospect of drawing Homer Simpson is less daunting than that of creating a realistic human portrait. And so it goes that art students draw cartoons before attempting realism. I was no exception.

Eventually, though, I attempted realism. To that end, I enrolled in classes at Watts Atelier for the Arts. My focus has been on learning to do realistic figure drawing. I’ve made significant progress.

But I’ve kept cartooning. And interestingly, I believe the most important thing that I have done for the progression of my cartooning is this continued practice of life drawing. The Animator’s Survival Kit, a seminal book on animation, makes the distinction between realistic and believable. The skill I’m developing doing life drawing is making my cartoons more and more believable.

My studies at Watts coincided with my purchase of a motorcycle: a 2014 Yamaha Bolt, for afficionadoes.

Readers of this blog have likely picked up on a pattern: When I learn something new, I write about the experience. And we’ve come to another turning point. Rather than writing about the experience of learning to be Mr. Cool Motorcycle Guy, it has come out in the form of cartoons. I wrote so many motorcycle cartoons that I decided to turn it into a series: Puns and Apathy.*

Puns and Apathy is the story of a guy who is sticking his head into motorcycle culture. There’s an entire weird universe of a subculture that goes along with motorcycles. It’s not just “motorcycle gangs” or whatever your impression might be, though there are certainly a lot of tough guys who ride. But there’s also a lot of people out there who just freaking love the experience of riding a motorcycle. Trust me–it’s a good time. (Unless you die.)

But Puns and Apathy is also the story of me as a developing artist. The early cartoons are absurdly crude. The newer cartoons are still quite crude. But you can see in the weekly-ish comic how my skills are developing. For example:

Of course what I want to represent remains just out of reach of my artistic capability. This, I’m discovering, is the Art Trap. The thing that gets you back in front of a blank sheet of paper the next day: You have a picture in your head but you recognize that you lack the skills to paint that picture. But you also recognize that–given enough practice and effort–you could have the requisite skills.

On a few recent occasions I’ve been moved nearly to tears by works of art. The most recent occurrence was while watching a video of Kim Jung Gi’s live drawing in the wake of his sudden passing. As I described to a friend, in watching the video I felt like a mountain climber standing before Everest. 90% of the emotion was awe evoked by the majesty of standing before the mountain. Another 10% came from imagining the effort required to actually climb it.

Had I watched the video of Kim Jung Gi just two years ago, it likely would not have evoked any emotion at all. But a week ago it nearly brought me to tears. I went through my life ignoring Mount Everest! And, of course, there are Everests all around us.

I’ll leave you with a one-off cartoon I did called Guilt Kitten. Guilt Kitten was inspired by an experience I had dog-sitting for a friend. While dog-sitting, I left a screen door open just a crack for about two minutes. I then remembered that my friend’s cat could have gotten out. I looked frantically for his cat for a few minutes and gave up. It must have gotten out. As it turned out, his cat had been hiding the whole time.

Wouldn’t it be nice to have a cute kitty who reminds you to feel bad about yourself for something you already feel bad about? How delightfully dismal.

*I’m reluctantly going to explain this joke: Puns and Apathy is a play on the title of the brilliant television series Sons of Anarchy.